This is a new version of a classic videogame Snake. Here is the video followed by the repository code. The version 2.0.4 should work. The 2.0.5 may have some issue.

live coding, how to move a sprite in pygame

A new youtuber with a new game project is here and I am always happy when it happens. So, waiting for the code of this game to be released, here is a video about this game in which there are…

This code will grab text from wav audio file. It has also a function get_wav to get the wav out of an mp4. This one uses ffmpeg, so you have to install ffmpeg first. Look into this blog to know…

This is an update of the code I made some years ago Code restyling Some code changes to make the code more readable, maybe. Made some classes just to understand where the widgets on the left and on the right…

This is the github repository.

A game on the ipad in 40 minutes (pythonista app)

In this video you will see the potential of pythonista for Ipad. I just followed the example that is included in the app as tutorial to make a game, trying to show the logic of making a simple 2d shooter and how simple is to program it in python on the ipad. Here is the post about this video. 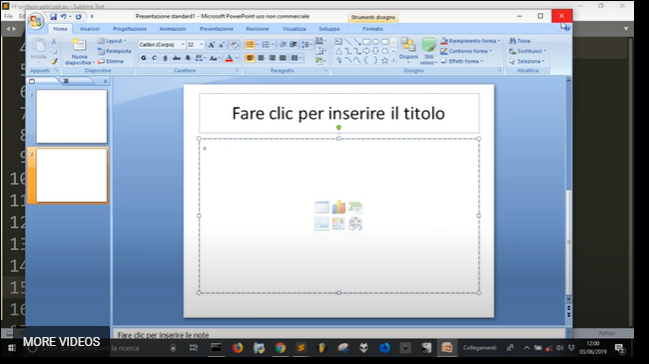 My games on itch.io
PyPowerpoint